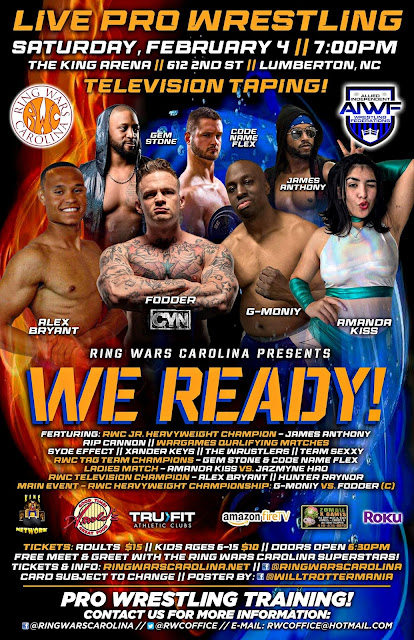 RWC is bringing all the Heavy hitters out for this one! Coming from a Hot winning Streak & Dubai, "The Holder of The Keys To Success" Xander Keys!

The Man that makes your Liver, Quiver at the stroke of midnight, Syde Effect.

Plus more, All the RWC Champions will be defending the hardware! You will see the Television Champion, Alex "Playboy" Bryant in a Grudge match against "Carolina's Own" Hunter Raynor!

The Newly Crowned & Dysfunctional RWC Tag Team Champions Codename Flx & "Diamond in the Rough" Gem Stone defend the titles against The former champs, Wrustler and the returning Team Sexxy on this TV Taping!

The Junior Heavyweight title will be on the line as the Champion James Anthony defends against Nick's favorite nephew Rip Cannon "Baby"!

Hey Guys, We have some Sexiness for you! The future looks good for Aman-da Kiss as she takes on the "Japanese firecracker" Jazmyne Hao.

This is an event and not a show cause we have The Control Your Narrative Superstar, NWA Psycho Boy and  RWC Heavyweight Champion FODDER vs. "Your Favorite DJ's, DJ", The Golden Opportunity holder G-Moniy! This is going to blow the roof off the building!

You will kick yourself if you miss this event! Some act like it, We be about it! RWC ready to show up and show out!

Posted by Ring Wars Carolina at 10:00 AM
Email ThisBlogThis!Share to TwitterShare to FacebookShare to Pinterest