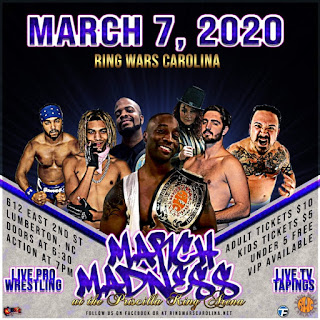 And So It Starts was a wild event and it rolled right into a HUGE Fatal Attraction! A lot of people got  what was coming to them in the form of accolades and/or disappointments. But one thing is Very True at this point. March, Well March will bring March Madness! A lot of RWC Superstars, or should we say TV superstars now, want a type of revenge only RWC can handle. March is square up time!

Hazel The RingMaster made her presents felt in Fayetteville NC on WWE Smackdown. Although she came up on the losing end that night, She made up for it at Fatal Attraction by putting her opponent down for the 1, 2 ,3! She wants another crack in RWC . This one won't be so nice R

The Jr. Heavyweight Champ, Devin Worthy retained his title in February but he also found a new friend.  The friend, Kaydin Pierre from the Pink Gang was so excited for coming out of the closet on the champ. Devin Worthy was not thrilled about the gifts that were left by Kaydin in the locker room area. The contract is signed and we will see who is the bigger man in this contest!

For the first time ever RWC Has the AIWF World Wresting  champ, Kevin Phoenix in the building and he is putting up his AIWF Title against RWC Heavyweight Champion, Gem Stone! Two of the top companies are putting their best against each other in one ring! Who will walk out as the winner take all? You will have to be in the building to know who is walking out with both belts! 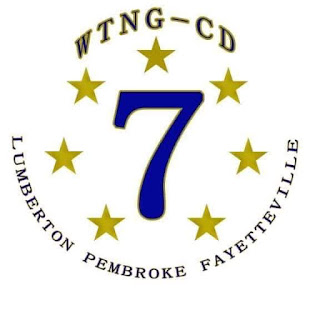 Posted by ring wars carolina at 10:00 AM No comments:
Email ThisBlogThis!Share to TwitterShare to FacebookShare to Pinterest 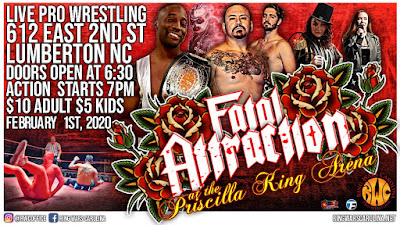 Ring Wars Carolina
Fatal Attraction Results 2/1/2020
Appetizer: Joseph Everhart Defeated Jebadia Carlton
Match 1: Cowboy Kool Jay Defeated Elijah Proctor
Match 2: Hazel the Ringmaster in her RWC Debut Defeated Abby Vick in her RWC Debut by DQ
The Rustlers came out and said how in 2020 they plan on becoming the RWC Tag Team Champions
Match 3: Jay Wolfe & Khalil Ford ended in a No Conest when Tiger interfered
Match 4: Devin Worthy retained the RWC Jr Heavyweight Championship defeating The Caribbean Tiger
(After the match Kaydin Pierre - Pink Prince came out and confessed to Devin its been him sending all the gifts the past several months, he then offered Devin a spot in the Pink Gang which he declined. Kaydin would then slap Devin and the two would brawl but was quickly separated by the officials.
Flex Simmons would come out and address the Lumberton crowd about his in ring career, he would say that he is 100% health and can return to in ring competition and he is also a changed man, Chance Lebeaux would come out and poke fun at Flex but when Flex would challenge him to a match he would quickly back down.
Match 5: James Anthony defeated Drew Thomas, D'Lo Aire Jordan & a debuting Chance Rizer in a Fatal 4 Way Elimination Match
Drew Eliminated D'Lo Jordan
Chance Rizer Eliminated Drew Thomas (D'Lo Interfered)
James Anthony last Eliminated Chance Rizer
Semi Main/RWC Tag team Championship: Pink Gang Defeated Curtis Cash in a 2 on 1 Handicap Match to become the New RWC Tag Team Champions.
After the match Curtis Cash would officially retire from in ring competition due to health issues and other personal reasons.
Main Event/RWC Heavyweight Championship: Gem Stone retained his RWC Heavyweight Championship Defeating a debuting Draven Lee
(After the match was over Tiger & Billy Brash would attack Gem stone until James Anthony, Flex Simmons & Devin Worthy made the save)
Join us on March 7th in Lumberton NC at the Priscilla King Arena when RWC presents:
"March Madness" 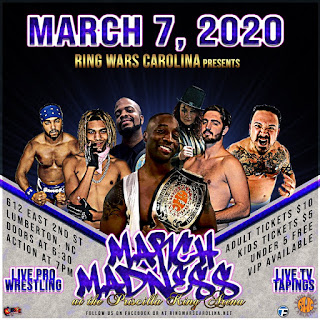 Posted by ring wars carolina at 10:00 AM No comments:
Email ThisBlogThis!Share to TwitterShare to FacebookShare to Pinterest
Newer Posts Older Posts Home
Subscribe to: Posts (Atom)