Next Event: "Calling you OUT!" 21 years of RWC Pro-Wrestling 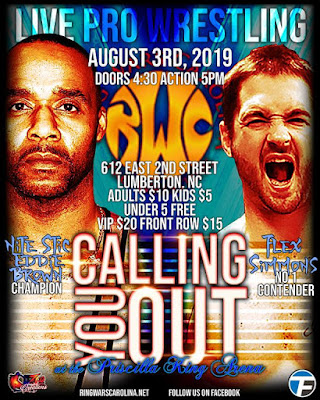 This month we celebrate 21 years of Ring Wars Carolina Pro-Wrestling.
Come early cause cake will be served as it last. This is the road to the BIG *** event. September 7, 2019 will be our biggest event yet and you will want to attend these August shows to get your discount ticket. You have to be present to get the discount!

The Gold and Platinum opportunities have all been won and the true survivor was none other than The Future of Honor and The Best Physic in Wrestling, Flex Simmons! Even though Flex is related to Richard Simmons, this in no way helps him cause he has alined himself with the wrong crowd. Flex has vowed to show Lumberton what a great body looks like and it will have the RWC Championship around it, come August 3, 2019. Nite-Stic Eddie Brown is looking at it in a different light. Eddie did acknowledge Flex Simmons for beating some of the top notch talent that RWC has to offer. He also knows that Flex Simmons has been backing up his words by winning the Tournament! Eddie Brown just wants Flex to know that he cost him a great opportunity and that was wrestling against The ROH Superstar Cheeseburger last month. Eddie is coming for revenge, maintain his championship and RESPECT!

The inter-gender match up of Jacob Ryan & Selena Rose vs. Jay Wolf & Lynzee Pike. This is going to be very interesting. Jacob & Selena are looking to carve their way in RWC but being the first power couple on the roster. The 2 look to squash anyone in their path. The path goes right up to the den of one Jay Wolf. Although Jay Wolf isn't new to RWC, he just hasn't found his stride yet. With all the distractions from Selena Rose, RWC resident Award winning Author, Lynzee Pike has stepped up and is backing Wolf. She has made the challenge and the match is signed! Come see who will win this match up August 3, 2019 at the Priscilla King Arena 612 2nd street in Lumberton NC!

You will see the RWC Tag Team Champions, The Misfits defend the titles against The Pink Gang!
The Champs defeated The Skinny dudes with Attitudes and thought it was vacation time. The Pink Gang put a stop to that idea. Now that the bullseye is on The Pink Gang, we may see the champs become the hunted instead of the hunters! Come see who will win this match up August 3, 2019 at the Priscilla King Arena 612 2nd street in Lumberton NC!

There will be plenty more action from James Anthony, Leo Wolf and Lumberton's own Savage Nation! The RWC Jr. Heavyweight Champion, Tiger and many more! Come see Live, Family Oriented, Pro-Wrestling on August 3, 2019 at the Priscilla King Arena 612 2nd street in Lumberton NC with a family in mind, NEW start time of doors opening at 4pm for the VIP's Meet and Greet and 4:30 general admission! 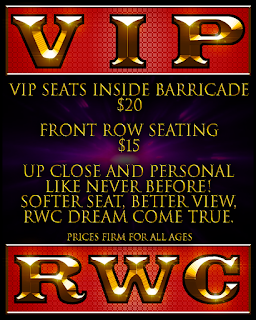 Posted by ring wars carolina at 8:00 AM No comments:
Email ThisBlogThis!Share to TwitterShare to FacebookShare to Pinterest 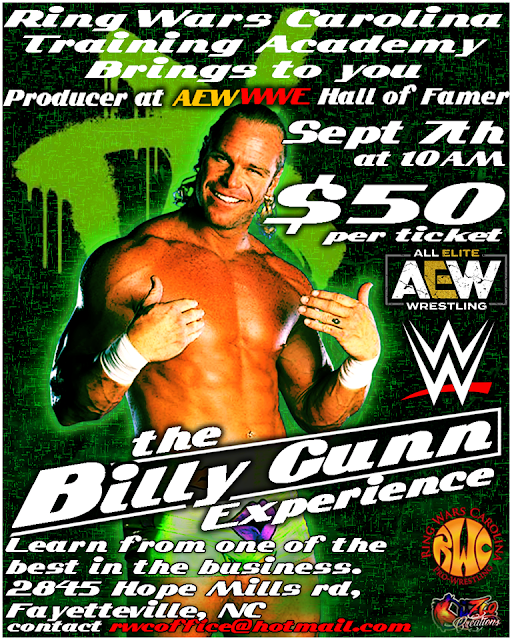 Ladies and Gentlemen, Ring Wars Carolina proudly brings to you, another Experience of a Lifetime! You better sign up asap cause, this will sell out!!!
Posted by ring wars carolina at 3:41 PM No comments:
Email ThisBlogThis!Share to TwitterShare to FacebookShare to Pinterest 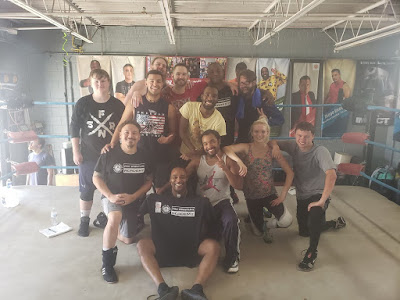 Training seminar with ROH Superstar, Cheeseburger went very well. We learned some new moves and counters. We learn some better ways to work TV matches. We learned the difference from indy work and professional work. We got a better understanding on what companies are looking for and how to get better at portraying it! This was by far the most educational experience and I hope the souls here will adjust and activate what they have learned today. Thank you Cheeseburger for letting us sit under the Learning tree!
Posted by ring wars carolina at 7:56 AM No comments:
Email ThisBlogThis!Share to TwitterShare to FacebookShare to Pinterest 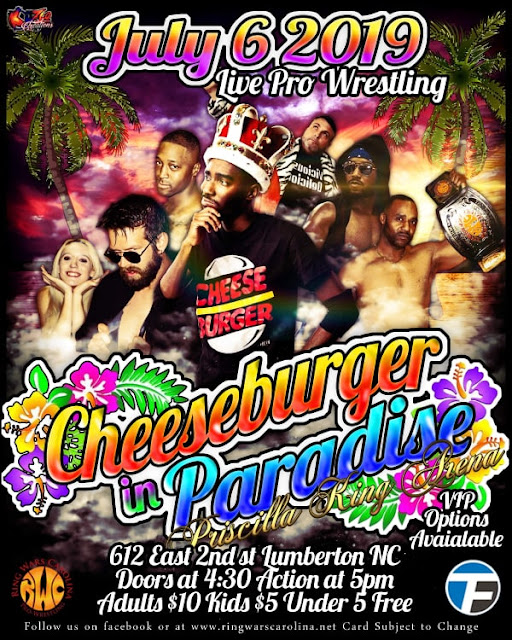 Cheeseburger In Paradise Results
The show started with James Anthony coming out and talking to Stephanie Grey about his match with Flex Simmons for the finals of the Golden Opportunity Tournament, James would say he planned to defeat Flex and then go on to Aug 3rd to win the RWC Championship.
Match 1: Lestat Cordova in his RWC debut won the Open Invitational Battle Royal to become the #1 Contender for the RWC Jr Heavyweight Championship last eliminating Gem Stone with a little help from Joseph Everhart who was already eliminated.
"Participants included Gem Stone, Joseph Everhart, Lynzee Pike, Dylan Mesh, Evan Stone, Pretty Boy Lane, Brad Blackmon, Leo Wolf & KrazyHorse
Match 2: ROH Superstar Ryan Nova in his RWC debut defeated Kaydin Pierre - Pink Prince
Stephanie Grey would then interview Flex Simmons and ask him his final thoughts on his match with James Anthony in the Golden Opportunity Tournament, Flex would say he hates that James's son was born to a loser father cause thats what he will be after tonight .
Match 3: Jay Wolfe would defeat Jacob Ryan by DQ when Jacob refused to listen to the referee's 5 counts in the corner, after the match Jacob and his GF Selena Rose would double team Wolfe until Lynzee Pike came out with a chair making the save for her friend. After the match Lynzee challenged both Ryan & Rose to a mix tag team match Aug 3rd against her and Jay Wolfe.
Match 4: Flex Simmons defeated James Anthony in the Golden Opportunity Tournament Finals to become the #1 Contender for the RWC Heavyweight Championship.
Semi Main: The Misfits defeated Skinny Dudes With Attitudes to retain the Tag Team Championships when Pink Gang would come out and interfere. After the match The Misfits, would say they have defeated all the tag teams in RWC and now would take a 2 month vacation. But The Pink Gang came out and said, "There is one team left to beat and thats them!" Dino accepted the challenge and that the match would take place Aug 3rd.
Main Event: RWC Heavweight Champion Nite-Stic Eddie Brown & ROH Superstar Cheeseburger would end in a no contest when Reckless Warriors Conection came out and beat up on Eddie. Eventually Cheeseburger would try and help out but, 3 on 2 attack was too much. Gem Stone came out and even up the odds! Reckless Warriors would retreat having Eddie Brown get on the mic and challenge Reckless Warriors to a 6 Man Tag Team!
Double Main Event: Gem Stone, Cheeseburger & Eddie Brown defeated Reckless Warriors Connection. 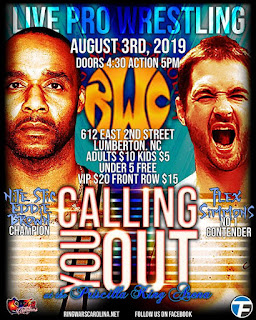 Join us on Aug 3rd in Lumberton NC at the Priscilla King Arena for out next event entitled Calling You Out as we celebrate 21 years of Ring Wars Carolina!
Posted by ring wars carolina at 2:39 PM No comments:
Email ThisBlogThis!Share to TwitterShare to FacebookShare to Pinterest
Newer Posts Older Posts Home
Subscribe to: Posts (Atom)