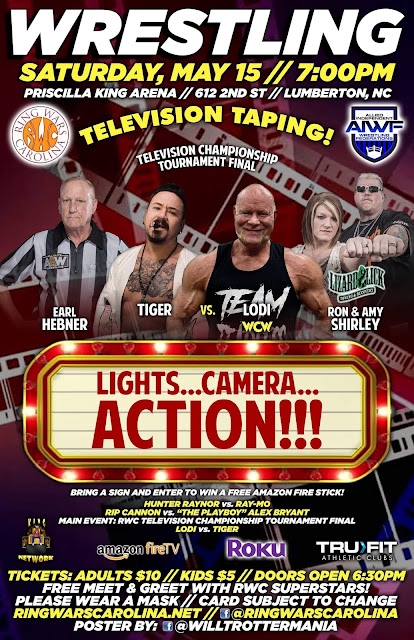 Its time ladies and Gents, It's time to see who exactly is going to be the Ring Wars Carolina Television Heavyweight Champion! Before we get to that, let me tell you about all the great action going down in The Priscilla King Arena on 612 2nd street in Lumberton NC.
The young Rookie sensation, The Man who traded his stripes for Tights, Hunter Raynor will be taking on The Beefcake, Ray-Mo. Both these guys are looking to get back on the winning train since they fell short in the semi-finals of the TV Tournament last month. Ray-mo put up a big fight against WCW Legend Lodi. But in the end, got caught and took home the "L". Hunter Raynor, gave his friend/trainer a run for his money but he will learn from his lil mistakes. Both men have something to prove to the fans in Lumberton and that is, Who can fall and get up!
Rip Cannon Babyy is picking up some momentum in the charisma column as of late. "The Playboy" Alex Bryant is on auto-pilot in the crowd approval area. Lets see who wants to win a match or just entertain the thoughts of being triumphant. These young men are putting in the work but, there can only be one hand getting raised!
You will also see the RWC Tag Team Champions Alpha Ace & G-Moniy, The Bro-Force in Action! 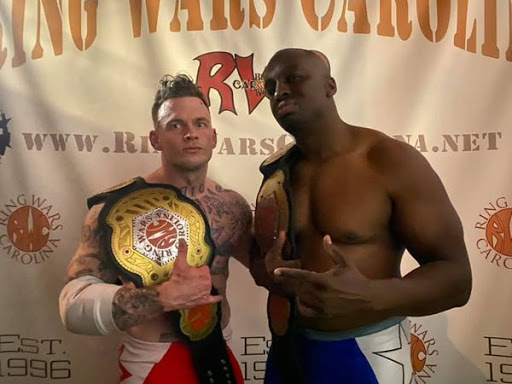 Along with some more RWC superstars. Bring a sign and you may very well win your very own Amazon Firestick so you can see yourself on TV. You just add The King Network and catch us live on Tuesday nights @ 8pm.
Now the Biggie...Ring Wars Carolina Television Heavyweight Championship. The Caribbean Tiger has pawed and scratched his way to the top of this mountain. He has defeated 2 men in his quest to reign supreme and hold this championship. Years of experience have played a part in getting to this moment. Tiger will be looking across the Squared circle at years of experience in a higher level of this game. The man who is considered to be not only the Best C.W. Anderson student but a World Championship Wrestling (WCW) legend in this business. The sign guy himself Lodi, from the flock. This man has wrestled the best and he is bringing it all to RWC for the Television Championship. You do not want to hear about this monday morning.
Live and in color, Presenting the Championship to the winner will be the Commish, the Legendary, infamous, "Mr. Damn Right I Did" Hall of Famer Earl Hebner. Along side of him will be The Stars of " Lizard Lick Towing" Ron & Amy Shirley! You Can't miss this event in Lumberton NC. Oh and remember the say in RWC, "You never know who may pop up!"
See you guys in The Priscilla King Arena located at 612 2nd street Lumberton NC. Doors open 6;15 pm and action starts at 7pm. You better get here early cause VIP and Ring side are getting requested now! Reach out to the Arena for details. Guaranteed to be an EXTREMELY smash hit!
Posted by ring wars carolina at 7:06 PM
Email ThisBlogThis!Share to TwitterShare to FacebookShare to Pinterest