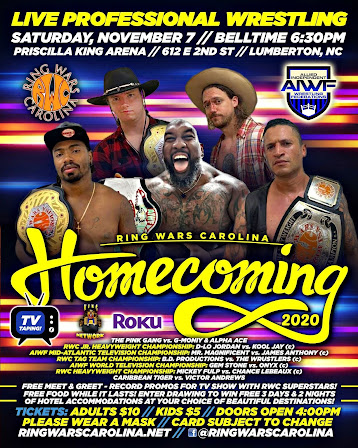 Ring Wars Carolina has never disappointed a Young fan at the Candy Bowl and they didn't this year! A lot of surprises were seen this year. Congratulations to the Candy Bowl 2020 winner, Mickey Fulp! But, during the event, controversy was amidst.
While former RWC Heavyweight Champion Gem Stone, was being interviewed a video was played on all the monitors. This video featured The AIWF Television champion Onyx! Onyx was laughing and picking on Gem stone for his rough patch or losing streak as of late. He said he wanted to show him how a winner does it on TV. Especially now that RWC will be on The King Network powered by Roku TV this fall and winter. Gem Stone said he would take this challenge and use it as a turning point in his career. This match was set for Homecoming 2020, The AIWF Television title is on the line. The Champion Onyx "The Pearl of Wrestling" vs Gem "Diamond in the Rough" Stone!
The name of this event should have been dubbed " As Seen on TV"! AIWF Mid-Atlantic Television Champion James Anthony, will be defending his title along with RWC Jr. Heavyweight Champion Kool Jay, RWC Tag Team Champions "The Wrustlers" and yes, The RWC World Heavyweight Champion Chance Lebeaux with Bato! AND! Just wait to see who all returns from the past and makes the return to RWC!
RWC will finally get Tiger and Victor Andrews in a one on one match1 This is going to set the records on The King Network! This feud will finally come to an end and RWC will be hosting this huge event!
How can we top all that? Free Food while supplies last, Yes Free Food while it last! But wait, there is more... RWC will be giving away a 3 day, 2 nite hotel stay in over 50 locations ranging from coast to coast! Doors open @ 4 PM. Get there early and appear in some commercials for the King Network on Roku TV!
All This and more on Saturday November 7, 2020 in The Priscilla King Arena on 612 2nd st. in Lumberton NC. Doors open at 4pm and action begins at 6:30pm. See you saturday!
Posted by Ring Wars Carolina at 6:52 PM
Email ThisBlogThis!Share to TwitterShare to FacebookShare to Pinterest