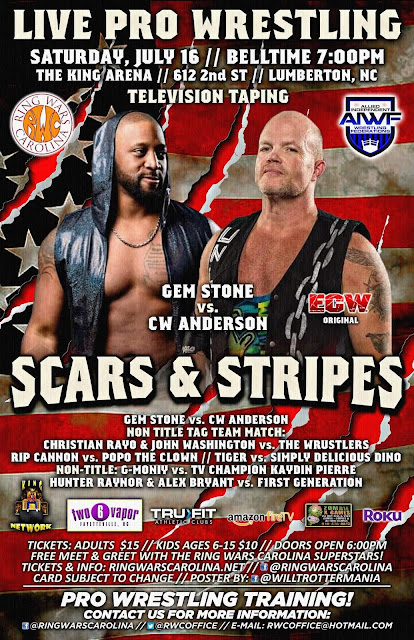 Scars & Stripes 2022 Results:
Due to a family emergency CW Anderson was unable to wrestle as scheduled, he apologizes and we send our prayers to his family.
**Nite-Stic Eddie Brown started off the night by saying he sold Ring Wars Carolina Pro-Wrestling LLC. and introduced us to the new owner Dexter Carter, Eddie said he might not be in charge anymore but is now free to do whatever he wants! Will we see wrestle again, maybe!
Match 1: Rip Cannon defeated PoPo The Clown
Match 2: John Washington & Christian Rayo defeated The Wrustlers by DQ, when Syde Effect made an appearance and attacked Christian Rayo.
Match 3: Flex Simmons defeated Caribbean Tiger
(After the match both men shook hands as a show of respect)
Dexter Carter along with James Anthony announced that on Sept 24th in Lumberton NC Ring Wars Carolina will Host the 2022 AIWF Wrestling AIWF Krazy 8 Tournament. James Anthony announced he would be the nights Special Guest Host and Dex Carter announced it would feature RWC's own Alex Bryant & Hunter Raynor.
Semi Main: Hunter Raynor & The “Playboy” Alex Bryant defeated James Anthony & Mulato X.
(After the match James would attack Hunter Raynor with a chair and target his right leg, James was looking to snap Hunter's ankle but all referee's came out and prevented James from doing further damage.)
After the match The “Playboy” Alex Bryant also had some choice words for his opponent on Aug 20th. Playa was sitting front row during the Tag Team match scouting Alex. These men will meet in Mt Airy NC in the finals of the AIWF Wrestling Top Gun Tournament at the 25th Anniversary Deal with the Steel inside a Steel Cage.
Main Event: Kaydin Pierre defeated G Moniy & Gem Stone to retain the RWC Television Championship.
(Gem Stone came out before the match and announced since his opponent CW Anderson wasn't here, he would add himself to the match and win the Television Championship)
Join us on Aug 6th in Lumberton NC at The King Arena, when Ring Wars Carolina presents the 24th Anniversary Show. 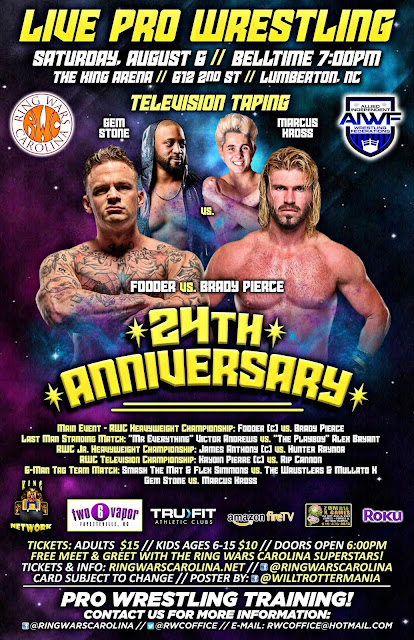 Posted by ring wars carolina at 7:10 PM
Email ThisBlogThis!Share to TwitterShare to FacebookShare to Pinterest