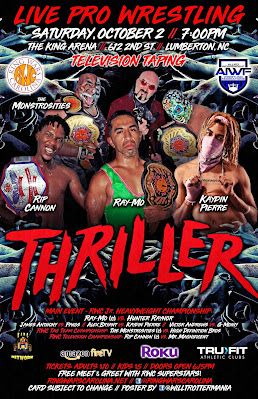 "Darkness falls across the landThe RWC hour is close at handWrestlers crawl in search of bloodTo terrorize y'all's neighborhood"
Come join The Best in Sports based Family Entertainment in the world. Ring Wars Carolina will give you chills when you see the Tag Team Champions, The Monstrosities take on High Definition bros! Kaydin Pierre will be in the house to splatter pink all over Victor Andrews, James Anthony and Pakos! Then is the Amazon Firestick, Roku and all the other stations buy-in to see the RWC Television Champion, The Charismatic Rip Cannon "Baibee!" defending the title against "Master of Sexxy" Mr. Magnificent. It aint over, RWC Jr. Heavyweight Champion, Ray-mo putting it all on the line against "Carolina's Own" Hunter Raynor in the Main Event!
Come on out and catch this action plus more at the Beautiful King Arena located at 612 2nd street in Beautiful Lumberton NC. Meet & Greet at 6:30pm and Bell time 7:30pm
Don't forget our Ring Pop also coming up in fayetteville NC
Posted by Ring Wars Carolina at 4:54 PM
Email ThisBlogThis!Share to TwitterShare to FacebookShare to Pinterest