Event Results: "Calling You Out 2" 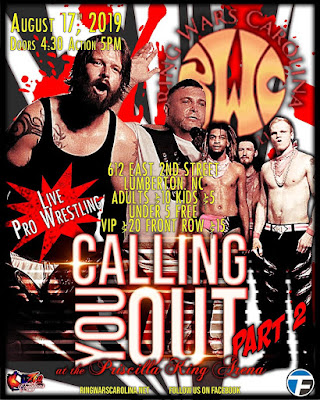 James Anthony was introduced as the nights special guest host of the evening. He called out the RWC Tag Team Champions The Misfits and asked about their No DQ match later tonight against the Pink Gang. During the interview they would be attacked by all 3 members of Pink Gang where they would severaly injure Simply Delicious Dinos wrist by placing it in a chair and then using another chair to smash his trapped wrist. James Anthony and a few other RWC superstars would help Cash & Dino to the back.

Match 1: Savage Nation defeated High Profile.
High Profile called out Savage Nation
Match 2: Kevin Phoenix defeated Mickey Fulp.
Mickey Fulp called out anybody in the locker room
PROMO
James Anthony was talking to the fans when he was interrupted by the Reckless Warriors Connection who took the show hostage demanding to know who the mystery partners in the 6 man tag team match would be. RWC Heavyweight Champion, Nite-Stic Eddie Brown would tell them they would know just, later in the night when its time for the Main Event. They would then say unless he told them right then and there who it would be they would stay in the ring all night. Eddie finally had enough and would take matters into his own hands. Eddie entered the ring but, got jump by RWC. Kris Nemesis would come out and clean house with his Kendo Stick and to check on Eddie, but would find himself attacked as well. Gem Stone would hit the ring with a chair, evening up the odds and Eddie would say his partners are here and instead of waiting until later in the night, lets have the six man tag team match right now! Joseph Everhart would accept on behalf of his team and then Flex Simmons would say, "lets make it an elimination match"!
Match 3: Reckless Warriors Connection defeated
Eddie Brown, Gem Stone & Kris Nemesis in a 6 man tag team elimination match
Gem Stone eliminated Joseph Everhart
Caribbean Tiger eliminated Gem Stone
Kris Nemesis eliminated Caribbean Tiger
Flex Simmons eliminated Kris Nemesis
Flex Simmons eliminated Eddie Brown
Semi Main: Kaydin Pierre - Pink Prince defeated Jay Wolfe & Lynzee Pike
Jay Wolfe called out Kaydin Pierre, and Kaydin called out Lynzee Pike making this a Triple Threat Match
James Anthony would then let the audience know that Simply Delicious Dino was not yet back from the local hospital and that Main Event was not gonna take place cause Curtis Cash was with Dino, Pink Gang would come out and say that they should be awarded the titles via forfeit, the referee would then start to countout the champions when suddenly Curtis Cash music hit and he said he would defend the championships by himself.
Main Event/RWC Tag Team Championship No DQ:
The Misfits - (C's) defeated Pink Gang to retain the championships
Simply Delicious Dino would show up and help Cash retain the titles 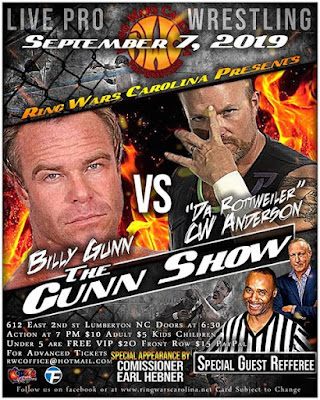 Posted by ring wars carolina at 10:01 PM
Email ThisBlogThis!Share to TwitterShare to FacebookShare to Pinterest