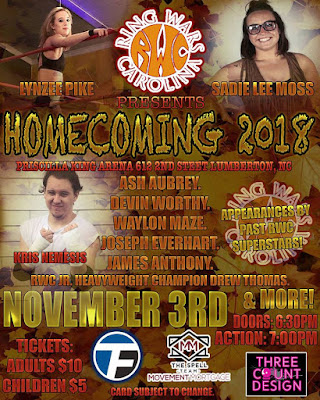 Homecoming 2018 Results
GM Primetime comes out and welcomes everyone to the show and then demands that RWC Heavyweight Champion Nite-Stic Eddie Brown come to the ring and tell him, this huge secret that he has been holding in for months. Eddie comes out and right before he is about to say what it is, the 2018 Candy Bowl Winner Simply Delicious Dino comes out. Hugs Eddie and says that, this is for 20yrs of friendship and that at the end of the night he will be the New RWC Heavyweight Champion and leaves the ringside area. Eddie then says changes have to be made in Ring Wars Carolina and that someone is kicking rocks tonight. Hangtyme comes out and gets in the ring and then Eddie says he has all the key players in the ring now. Eddie says he needs to make a phone call to the RWC Headquarters in Toronto where he calls TNA Hall Of Famer Earl Hebner who says Primetime is no longer the General Manager and He names himself the Commissioner of RWC, Primetime then says he knew that Eddie was up to something and he was up to something also and he went to the RWC Board Of Directors and got his Managers license and later tonight he will be introducing his new client.
Match 1: Open Invitational Battle Royal where the winner faces RWC Jr Heavyweight Drew Thomas later in the night, particapants included
Flex Simmons, Jay Wolfe, Mama's Boy, Syde Effect, Trieze Genovese, Alexander Moss, Joseph Everhart, The Ping Pong Master Waylon MAZE, Krazyhorse, Derrick Douglas, Kris Nemesis, Gem "BBD" Stone, Kwamere Carter & "The New Nature Boy" Shawn Sharp
Gem "BBD" Stone & Kris Nemesis are declared Co Winners after going over the Top rope and both feet hitting the floor at the same time, it is then announced that Drew Thomas would defend the championship in a Triple Threat Match later in the night
Match 2: The debuting Sadie Lee Moss defeated Lynzee Pike via pinfall
Match 3: Hang Tyme & Chance Lebeaux ended in a Double Disqualification after both men low blowed each other
Match 4: RWC Tag Team Championship
f1rST Generation defeated RWC Tag Team Champions Airtime Rockerz when James Anthony pinned The real_Encore via a School Boy to become 4x RWC Tag Team Champions
(James Anthony announced "Mr. Everything" Victor Andrews as his mystery partner before the match)
Semi Main/RWC Jr Heavyweight Championship
Gem "BBD" Stone defeated Kris Nemesis & RWC Jr Heavyweight Champion Drew Thomas via Pinfall after hitting a double spear on both competitors to become the New Champion
Main Event/RWC Heavyweight Championship
RWC Heavyweight Champion Nite-Stic Eddie Brown defeated Simply Delicious Dino via Pinfall to retain the championship
After the match was over Primetime & Dino would attack Eddie Brown and Primetime would then introduce us to his superstar he would be managing, the returning Curtis Cash. all 3 men would start putting boots and fists to Eddie until Hang Tyme came out to make the save. After the match was over Hangtyme & Eddie Brown challenged Simply Delicious Dino & Curtis Cash to a Tag Team Match Dec 1st at Fan Appreciation Night
Join us on Dec 1st in Lumberton NC at the Priscilla King Arena for the final show of 2018
Posted by Ring Wars Carolina at 3:25 AM
Email ThisBlogThis!Share to TwitterShare to FacebookShare to Pinterest