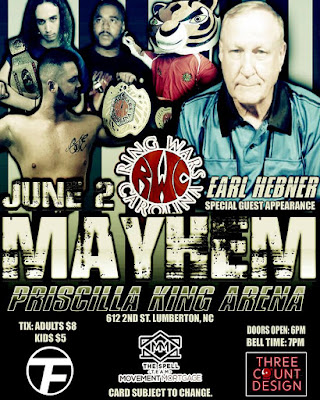 Match 1: Donnie Ray defeated Coldblood
Match 2: Kris Nemesis defeated Mickey Fulp & Ash Aubrey in a Triple Threat Match
Match 3: 4 County Championship
Devin Worthy & 4 County Champion Drew Thomas ended in a No Contest, during the Match Drew his a suicide on Devin on the outside and when Drew went to throw Devin back in the ring Devin kicked Drew in the gut and tossed him into James Anthony who was sitting on the outside of the ring watching the match, Devin then would get Drew back in the ring and go for the win but James pulled Devin out the ring and superkicked him and then got a steel chair and went to assault Drew but he moved and went to hit a running knee on James but he rolled out the ring with the match ending in controversy
Match 4: Lynzee Pike defeated Roni “Big Bang “Nicole by DQ with Earl Hebner as the referee, Roni pushed referee Earl Hebner twice, forcing him to call the match
Semi Main: Vicious & Delicious defeated RWC Tag Team Champions Hang Tyme & Joseph Everhart earning a Title match on July 7th
Main Event: Chance Lebeaux & Travis “Mason Jar” Dixon defeated RWC Heavyweight Champion Nite-Stic Eddie Brown & Big Black Guy
Next show: